Ok, so we weren’t technically stranded, although we did get snowed in at one point (more on that later). Last weekend we went on a bit of a spur of the moment, unplanned trek in the mountains, and if you know me, being on an unplanned, spur of the moment trip is basically the same as being stranded!

At 5pm on Friday we began the three-hour trek from Songdo to Gapyeong (east of Seoul) for the Seoul Baseball League finals on Saturday. We broke up our trip with a stop in Itaewon for dinner at Petra. I highly recommend this Middle Eastern restaurant, which provides not only delicious but beautiful meals.

After dinner we continued on our journey, and around 10:30pm we arrived at Cheongpyeong station. As this was a spur of the moment trip, we didn’t plan our hotel extremely well, and it was a 30 minute drive from the station. This was my first opportunity to use the Kakao Taxi app, and after typing in our location and destination (in Korean) to request a taxi, and fielding a phone call from the taxi driver using my very limited Korean skills, our taxi arrived! We finally made it to Hotel Cello, checked in, and got some rest in the nicely decorated room. If you have a car I would definitely recommend a stay at this hotel, but without one it doesn’t make much sense unless you really love French-themed amusement parks (details to follow).

In the morning one of my favorite things about travel happened: we got an amazing surprise. Having arrived late at night in the dark we had no idea what our surroundings looked like. When we woke up in the morning and looked out our window we saw that we were situated on a lake surrounded by a beautiful mountain landscape.

When we walked outside to grab breakfast from the nearby CU convenience store, we were also surprised to learn that our hotel was right across the street from one of the area’s major tourist attractions: Petite France. So if this is a must-see for you then Hotel Cello may be the perfect location for you! 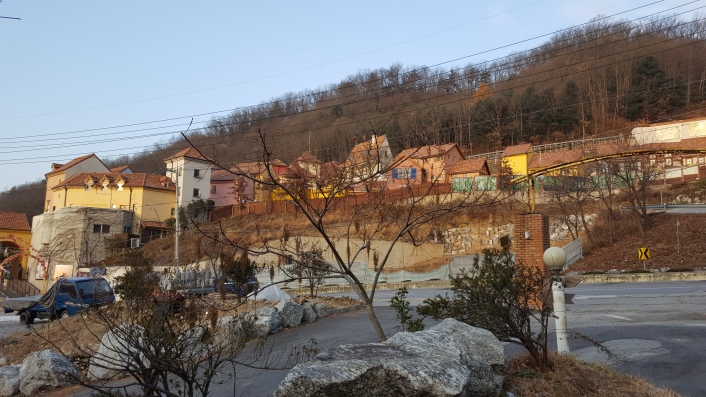 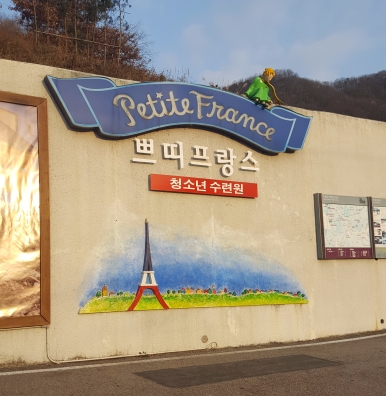 We quickly ate our breakfast and around 9:15am I tried my hand at the Kakao Taxi app again, but this time I was not so lucky. Since our hotel was so far from the station there weren’t any taxis around to pick us up, but we did manage to find a bus stop. We needed to arrive at the next station by 10:30am for the shuttle to the field, and the only train that would get us there in time was set to depart at 10:14am. Unfortunately, the bus didn’t arrive until 9:50am. As I mentioned before, we were about a 30 minute drive from the station, so things weren’t looking good. That was until the bus started speeding off down the hill! The driver took the winding twists and turns of the route along the river at break neck speed, and we arrived at the bus station around 10:10am. Unfortunately, we needed to be at the train station, not the bus station, but on the plus side there were several taxis at the bus station and we hopped in one and sped to the train station. We arrived about 2 minutes later, raced to the platform, and arrived just in time to catch the 10:14 train!

Finally at the playoffs, the morning started off with a bit of a chill, and then the snow slowly started to fall. By game two, Brad’s game, the field was starting to get covered.

Two hours later during the championship the snow really started to pick up.

They only made it through the first inning before the game was called due to the snow conditions. That is when we got stranded. The tour bus that was set to take us back to the train station could not make it down the steep hill due to all of the snow. We sat around on the bus for about an hour and a half trying to talk to the staff at the field and figure out how we were going to get home. Finally, another bus became available and agreed to meet us at the bottom of the hill. So we made the short trek down the snowy hill (with only a few slips and falls), found the bus, and made it to the station. 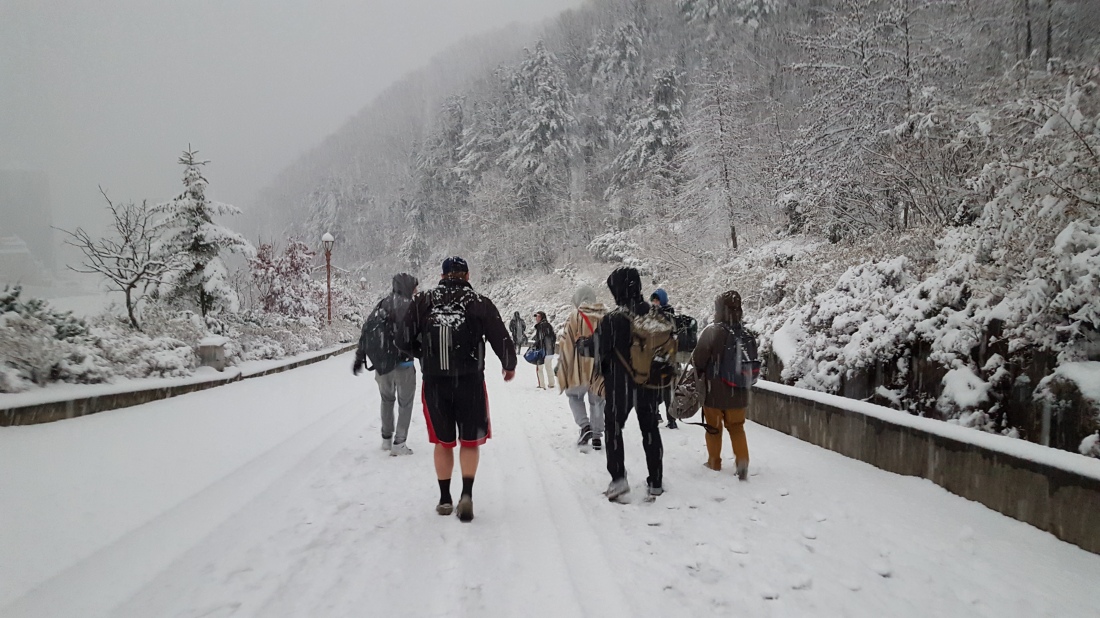 Luckily, that morning we had decided to stay another night in the area so we only had to go one stop back to Cheongpyeong Station. This time we booked a hotel close to the station, however, by the time we arrived the snow had turned to rain and we were unable to get a taxi. More luck, we had been introduced to the Egg House hotel’s proprietor and she sent her husband to come pick us up. In addition to this wonderful gesture, as we were driving he asked if we had eaten dinner yet (we hadn’t). He asked if we liked beef, and when we told him I was a vegetarian he let out an audible gasp and called his wife. After some discussion, an “oh my god,” and some suggestions from me of tofu or bibimbap, we found a restaurant. Tofu soup was ordered for us to share, and it was delicious! Just what I had been wanting ever since my return to Korea. The handmade tofu and many side dishes were just the kind of traditional Korean meal I love. It turned out that there was small shrimp in the soup that I didn’t notice until the end of the meal (hopefully they had just been on the bottom and I hadn’t been eating them the whole time), but in Korea that is about par for finding vegetarian food.

When we were finished we called to be picked up and arrived at the Egg House. The room was cute and clean; just what we needed. 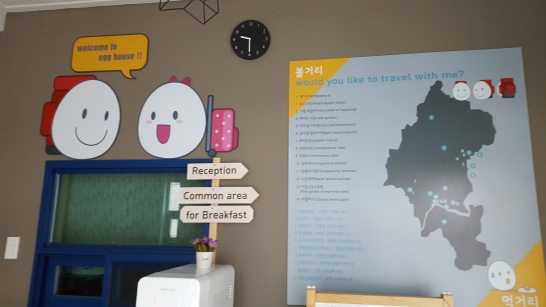 And we woke up to another great view in the morning.

The next day we headed to Gapyeong station and took a taxi to the Nami Island ferry. We spent 4-5 hours exploring the island, which is basically a snowman themed nature park with little shops, cafes, and restaurants. The scenery was very beautiful and we had a great time just wandering around (for a glimpse into our day on the island peruse the photos below). Bringing more magic to our day, when we were set to leave we walked past about a dozens taxis to the front of the queue and when we hopped in we realized that it was the same driver who dropped us off that morning! We looked at each other and all had a “wow, what an amazing world” moment, and even though we didn’t speak the same language we all understood the joyous wonder of the world that we felt in that small moment. It was an amazing day! 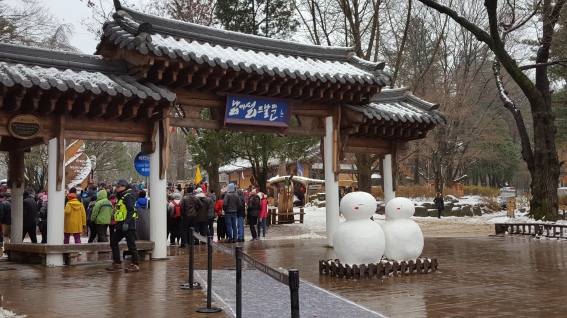 Ferry to Nami Island (남이섬); Entrance to the island 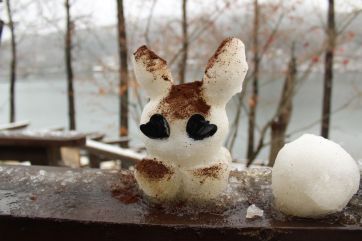 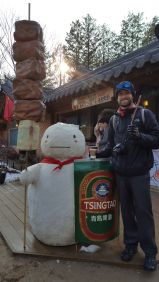 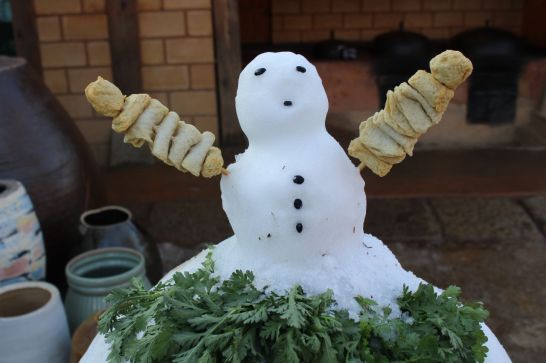 Just a few of the many Nami Island snowmen! 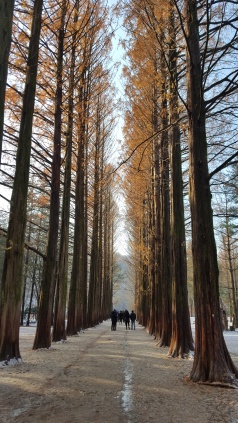 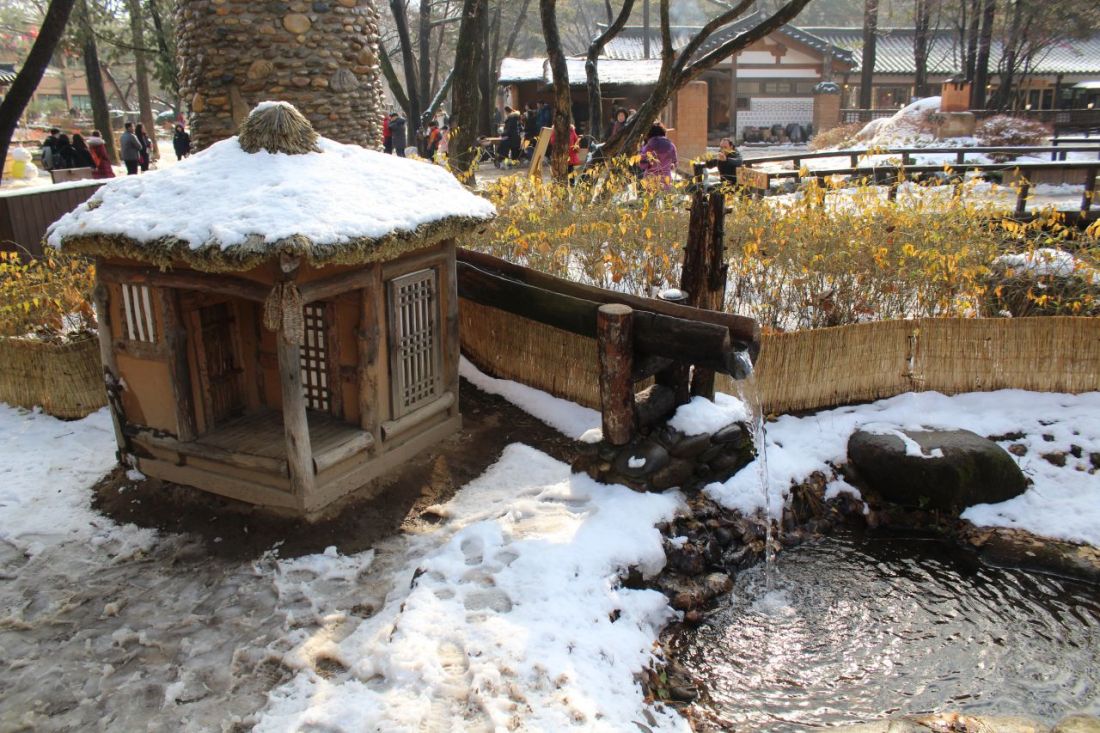 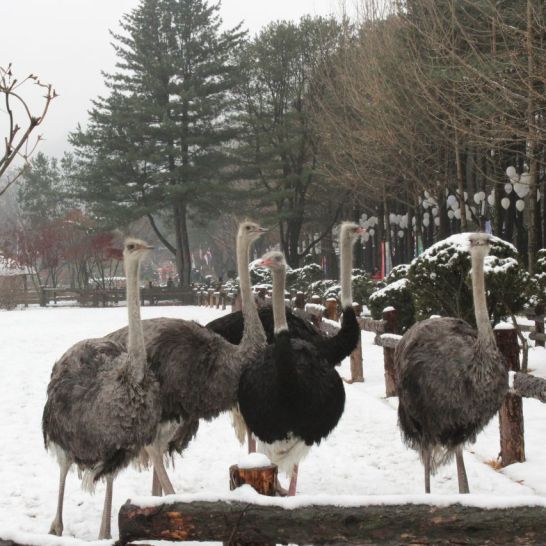 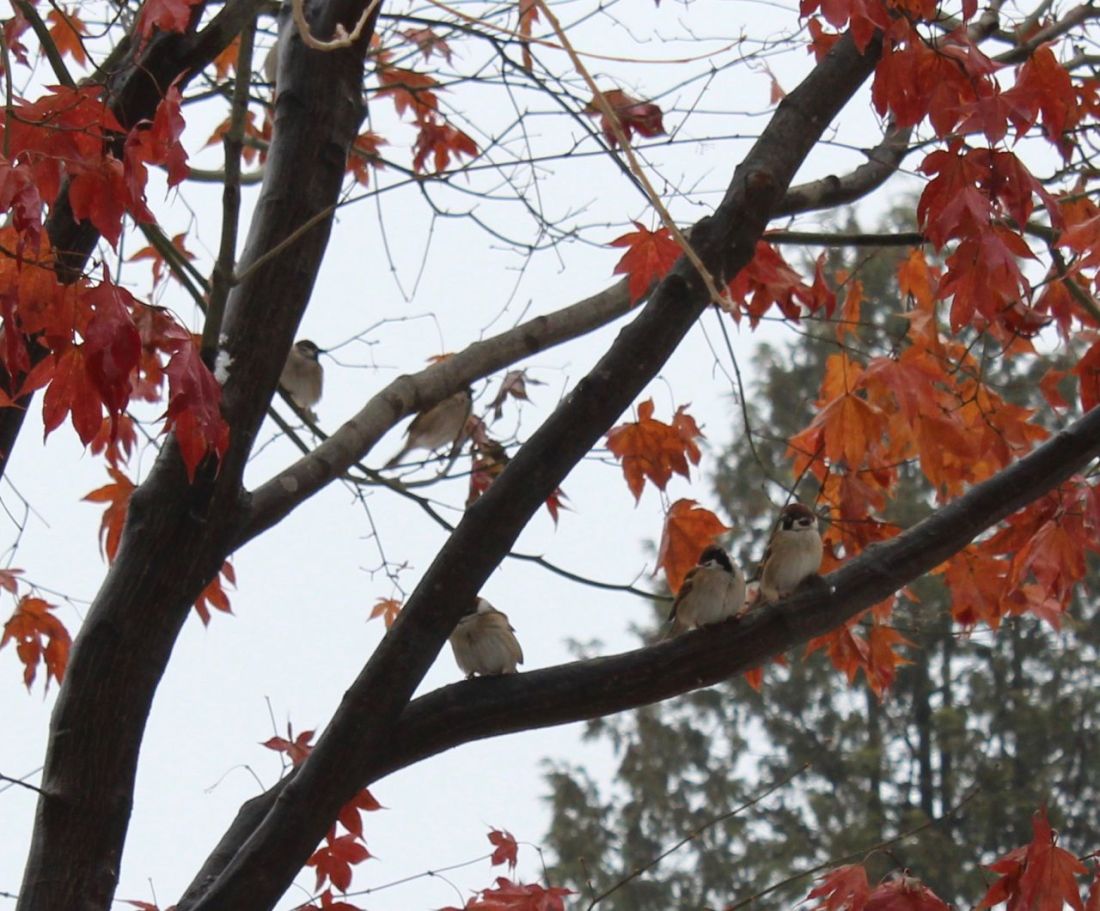 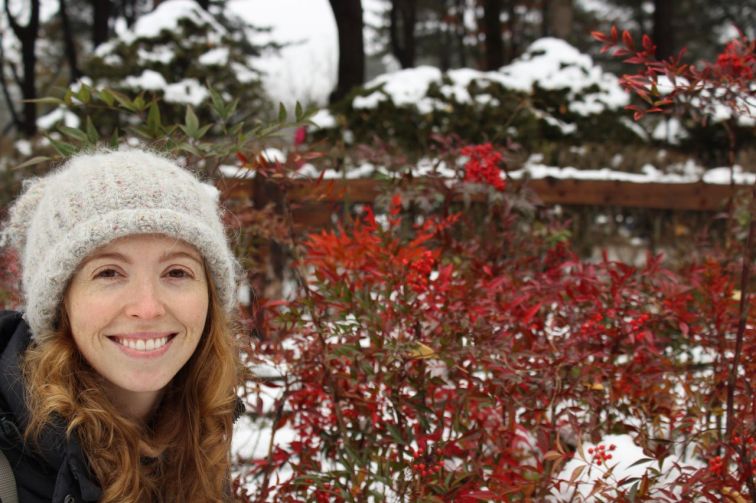 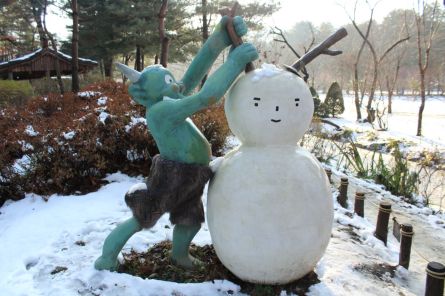 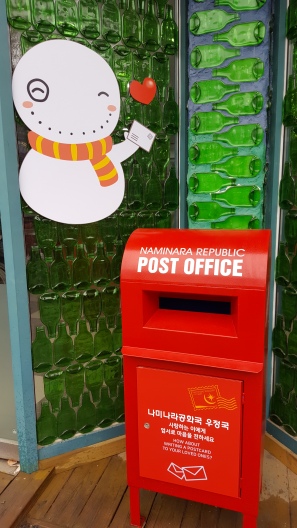 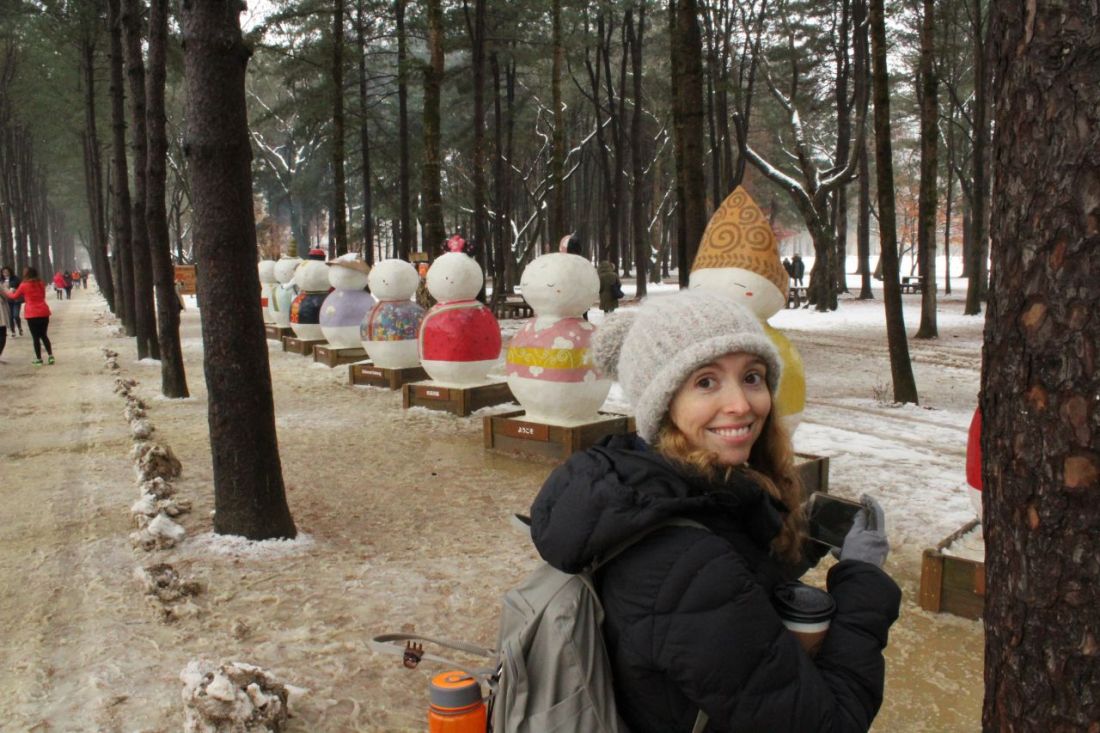 Snowmen of the World! 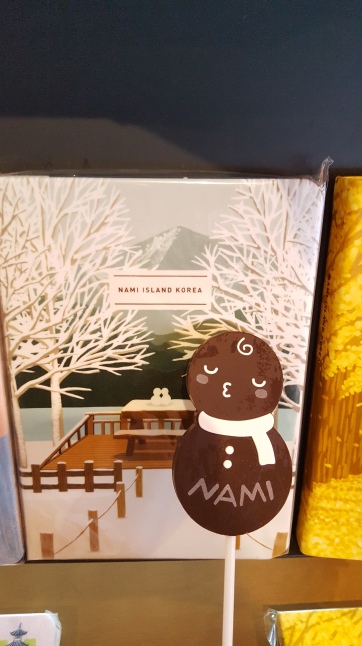 Warming up by the fire; Nami souvenirs!

Lovely day in Nami! Are you inspired to visit?

View all posts by Natalie

One thought on “Stranded in Gapyeong”